Dave Epstein Carl Vondrick
Columbia University
Paper Data Code
Can you guess this person's goal? Hover or tap to check your answer!
Although only the action is observable, you were probably still able to predict the goal behind this video - opening a wine bottle. In this paper, we introduce a model to learn goal-oriented video representations in the form of latent action trajectories.

We introduce a framework that predicts the goals behind observable human action in video. Motivated by evidence in developmental psychology, we leverage video of unintentional action to learn video representations of goals without direct supervision. Our approach models videos as contextual trajectories that represent both low-level motion and high-level action features. 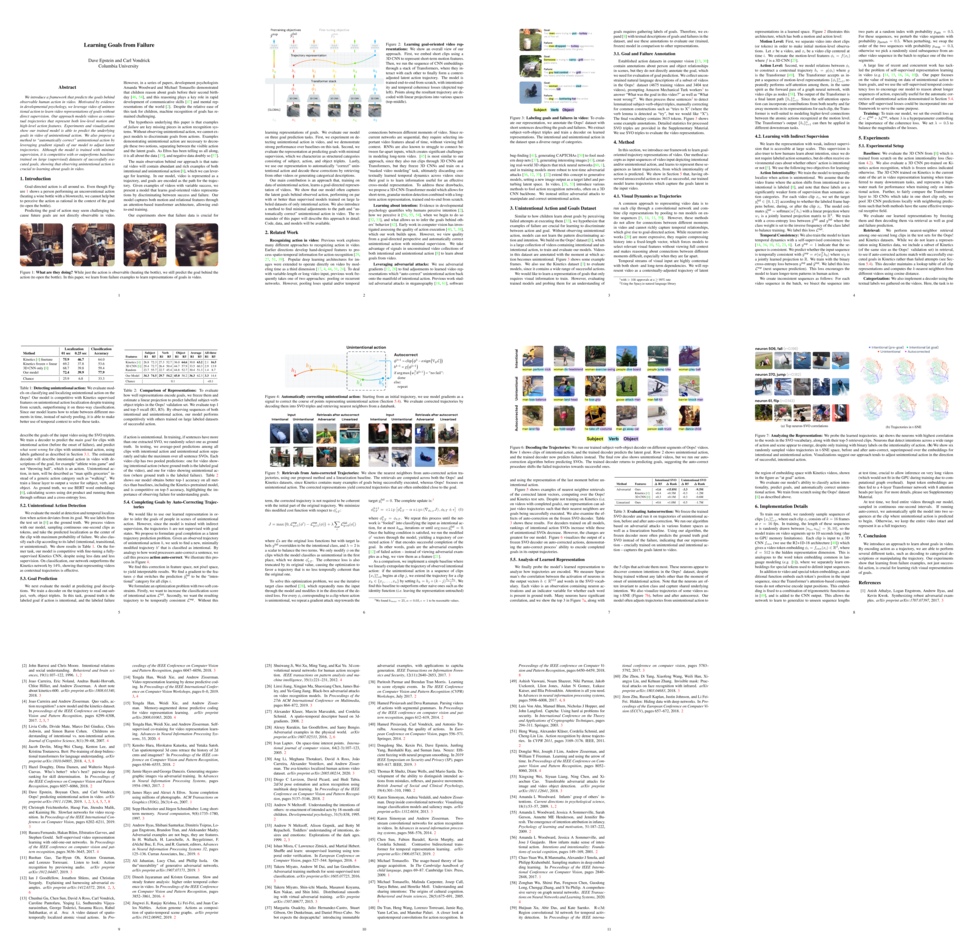 Decoding learned trajectories: We freeze our trained model and train a linear decoder to describe the goals of action, outputting subject-verb-object (SVO) triples. The decoder predicts the goals of video when the action shown is intentional (lefttop) and predicts unintentional failures when they appear (rightbottom).

Unsupervised action neurons emerge: We show the neurons with highest correlation to the words in the subject-verb-object vocabulary, along with their top-5 retrieved clips. Neurons that detect intentions across a wide range of action and scene appear to emerge, despite only training with binary labels on the intentionality of action.

Goal: Two
men
were trying to
put
a
turkey
in a vat of hot oil.
Failure: The
men
dropped
the
turkey
aggressively and oil overflowed onto the grass.
Goal: A
man
was trying to
cross
the
road
on green as a car was coming towards him.
Failure:
He
fumbled
his
shopping
and his crate emptied out all over the sidewalk.
Goal:
Someone
is trying to
carry
a
grill
down the patio stairs.
Failure: The
guy
lost control
of the
grill
since it was too heavy and the wheels slipped.
Goal: The
woman
just wanted to
sled
down the snowy
hill
.
Failure: The
dog
was
bothering
her
the entire time and just wanted to play.
Previous Next

We collect unconstrained natural language descriptions of a subset of videos in the Oops! dataset, prompting Amazon Mechanical Turk workers to answer “What was the goal in this video?” as well as “What went wrong?”. We then process these sentences to detect lemmatized subject verb object triples, manually correcting for common constructions such as “tries to X” (where the verb lemma is detected as “try”, but we would like “X”). The final vocabulary contains 3615 tokens. The obtained SVO triples can be used to evaluate video representations of goals. We show some examples to the leftabove.

Funding was provided by DARPA MCS, NSF NRI 1925157, and an Amazon Research Gift. We thank NVidia for donating GPUs.